A recap from last time… 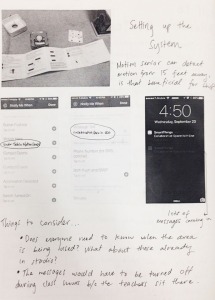 The first step in creating my demo was to set up the motion sensor that has been placed under the “collaborative work table.” There were many steps when trying to set up the new device on the SmartThings app. There were a couple of things I realized I needed to consider.

What happens when someone sits at collaborative table…

When preparing the demo and my process, I realized that my initial narrative didn’t line up very well with how the demo works. Instead of just checking the SmartThings app to see if someone is using the collaborative area and the smart board, you instead receive a message every time the area is occupied. The obvious problem with this system is that it needs to learn to automatically shut off during class time because that’s the typical area that the teachers  and teacher’s assistants sit. 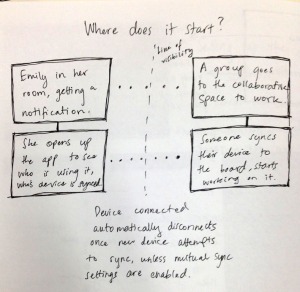 There are two simultaneous processes going on. One is the process of Emily checking the app to see if the area is occupied or not. The other is when the act of occupying the area causes the environments students and teachers to become aware of this. Both are ways to get to the same end goal which is to schedule times, sync devices to the smart board, and effectively use the space.

It was really interesting to go through this process while playing with the motion sensors and figuring out the best placement of them. I ended up having to flip the table around because it sensed people just walking by.

I really struggled with how to best combine both digital narrative and the in class demo. Since the actions I wanted to display in my narrative didn’t quite match up with my demo’s features, it was hard to sync them so that they made sense together. My intension was to show two different trigger points in this interaction. One is actually using the SmartThings app to see if anyone is using the collaborative space and the other was being notified when someone is using the collaborative space. One thing I would really like to have happen if this were to become a reality for our space was for the app to recognize both who is in studio (and therefore doesn’t need to be notified when the space is being occupied) and who has an interest in knowing if the collaborative area is open. I also wanted to play with syncing the calendar schedule, on the SmartThings app, of who is using the space to when you are notified when the space is being occupied or ask you if you’d like to sync your device with the Smart Board now or when you actually arrive at studio.

Although I think I have relatively concrete ideas, one thing I wish I had done is be a little bit more creative with the interaction. I really admired Lily’s idea of making our divider wall transparent that can change when different situations arise. For next  time I will try and spend more time on coming up with interesting and innovative ideas before I jump into one.