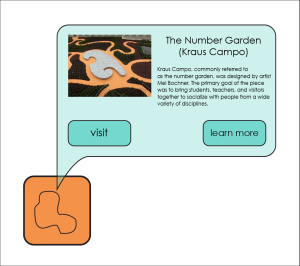 Going into my final narrative, hifi presentation, I didn’t exactly know what I wanted my story to be. I knew I wanted a clear entry point into the app but the middle and final stages of the story were still unclear. Through photographing Emily and working our way through the story I was able to develop a more concrete idea for my narrative. I did run into problems, however. One of the biggest problems was my limited understanding of illustrator. I also struggled with the layout of my final presentation and how I was going to display some of the interactions going on between the user and the app while integrating it with the environment of the page.

Some of my concepts had to be cut from my final narrative due to my lack of ability to create images that are as hifi as I wanted them or needed them to be. For example, the interactive screen that was going to be present at the actual piece was far too complex of an interaction and was not the main purpose of the narrative.

I went into the final stages of the project with a plan to photograph the narrative, select a couple of frames, and play around with them to create highlight moments. In theory this wasn’t too complicated, however things became much more complex with you start dealing with which images you are going to use for your interface, the appropriate amount of a visible person holding their phone and not just a floating hand, and many other components. I also planned on incorporating text into my slides for the final deliverable, however I realized that what I was planning on writing was kind of unnecessary and slightly redundant.

Something I would have done differently would be to try and show a clearer transition between interacting with the main screen and getting to the directions option. I probably should have also incorporated more options in navigating through the app. For example, not just having a human perspective directions option because some people are coming from further away. There are many features I wish I had incorporated that I had planned on doing originally, however time and complexity of the problem did not permit in the end.

During the process of putting together this narrative there were many ups and downs. I struggled with how many different entry points I should have and got very caught up in the prequel section of using the app rather than the actual interaction between the person, the app, and the environment. There were a couple of distractions during the process, most of them personal issues I’ve been dealing with that allowed my brain to stray from the problem at hand. For the future I think I will try and deal with all of my personal issues before I enter studio so I can be totally involved in what I’m doing.

I think my motivation for doing the project was in the idea that I may have a great portfolio piece at the end of it if I really tried to bump up my computer and narrative skills. I think another motivation was the encouragement of my friends throughout the process. It’s really great to get both positive and constructive feedback from your peers and I wish I had asked more frequently for it because it definitely made a difference in my final product and how I got there.

As previously mentioned, a big challenge for me was laying out the narrative and narrowing down my story as well as how to best illustrate the interactions between the user and the interface. I also struggled with how to make the overlay of the new screen look believable and real.

One thing I think I did well was simplifying my story so that it’s very easy to explain and illustrate to the viewer. I’m also very proud of a couple of my photoshopped screens given my lack of experience with the program.

One thing I would have done differently would be to add a page where the entire app interaction is laid out so the viewer knows exactly how to get to a certain page and navigate back to where they were or started from. I think I got caught up too much in the narrative aspect that I forgot to go back and clarify the app’s path.